I really like the Between the Pipes series annually put out by In the Game. Although I couldn't justify spending the cash to buy a box (money is tight at the moment). I did purchase a few packs. Here are some highlights:

I got a bunch of Future Stars, here are a few 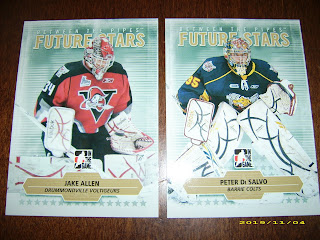 I am a little familliar with Jake Allen, I know there was talk of him coming up to Columbus this year when Steve Mason struggled.  I don't recall if he did or not, I think not, correct me if I'm wrong. 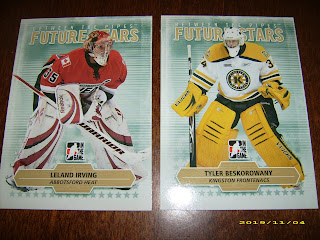 Tyler Beskorowany looks to be the future goalie in Dallas, making this card's claim as a "Future Star" very appropriate. 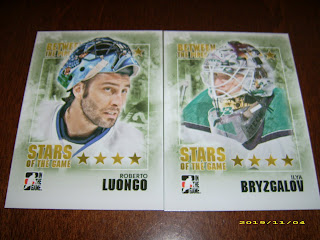 I like the Stars of the Game subset. Sometimes when card companies try to do the "sketch" thing it looks awful, but in this instance I think it looks pretty cool. Is it just me or is Luongo looking more and more like Borat every day? 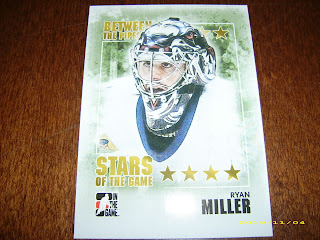 One of the few non Blackhawks I'm actively collecting is Buffalo net minder Ryan Miller. This is a nice looking card of the Olympic hero. 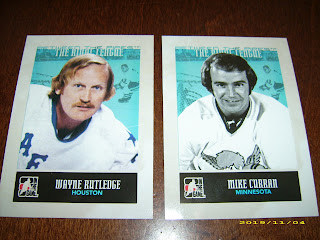 Two Rival League cards, spotlighting goalies who played in the WHA. I really like the Minnesota Fighting Saints sweater, although you can't really see much of it on Curran's card here. 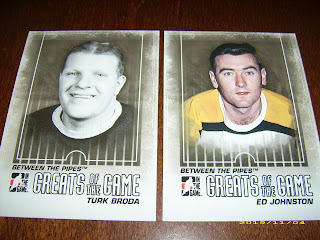 These Greats of the Game cards are nice, if a little blah. 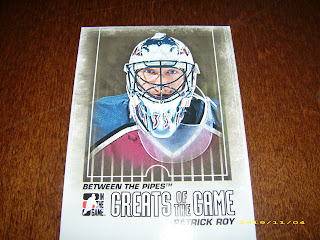 Although I somewhat detest Patrick Roy, you can't deny his greatness.  This is a decent looking card, though I would prefer him in a Canadiens uniform. 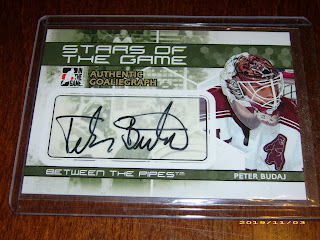 I did score a auto in my purchase, one of Peter Budaj of th Avs. I know two things about Budaj, he backs up Craig Anderson, and he's the guy with Ned Flanders on his helmet.  Unfortunately, you can't see good 'ol Ned on the card.  I suppose ITG would be face with a lawsuit it they allowed that to happen. 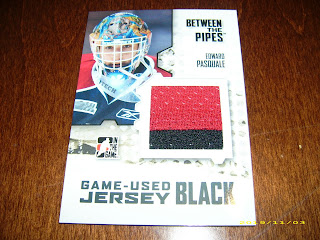 I also scored a nice 2 color jersey card of Edward Pasquale.  According to the back of the card, this jersey was used in the OHL All-Star Game. That's pretty cool.

I do plan on buying a box of these eventually.  Too bad I didnt get any of the masked men cards. Later, I found out that someone pulled a Brodeur glove card in the same box. Needless to say that put a little damper on things. Has ITG put a checklist out for the glove/pad cards? A Ryan Miller would be pretty sweet.
Posted by Blackhawks Cards at 2:26 PM